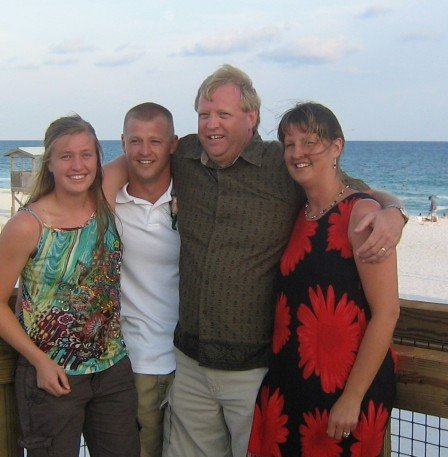 “I had the pleasure of calling this man my father. Thirty years, nine months, 30 days, four hours and 45 minutes here on earth, we got to make memories,” said Josh Olson, son of Bruce Olson. “Time is the most precious commodity out there. It is the one thing you can’t buy or ever buy back.”

Bruce Olson suffered a massive heart attack at the age of 51. Bruce was a son, husband, father and grandfather. He was known for being a coach, visionary, traveler and motorcyclist. He was a spontaneous Iowa State fan that was family-oriented and hard working.

“Bruce was always happy and full of life,” said Myrna Olson, Bruce’s wife. “He never met a stranger and loved to energize his children.”

She remembers her husband as being a man of integrity and putting others before himself. So, it is no surprise that Bruce always wanted to be a donor in order to help others. “As a family, we were encouraged to know that he was still able to help others even in his death,” Myrna said.

Josh recalls watching his mother and father purposefully love each other as he grew up. “There was no doubt in my mind that my father and mother were angels here on earth brought together for a purpose,” Josh said.

Allesha Olson, Bruce’s daughter, said her father always kept their mother on her toes by pulling silly pranks. “He truly exhibited what a real man is,” she said. “I’m hoping to carry on his integrity, determination, supernatural joy and servant’s heart.”

She remembers her father living not by the world’s standards, but by standards of integrity and ethics. Josh agreed, saying his father was a man of integrity, morals and ethics. “He had to make his voice heard when others would not speak up,” Josh said.

Josh firmly believes in the importance of time. He emphasizes to not take time for granted, but embrace every memory to its fullest. “Tomorrow is not promised, but the future is a gift,” he said.

He recalled Tuesday, April 29, when Bruce sent him a text message. Typically, Josh would text back but that night he decided to call his dad. “The last words were ‘we will talk tomorrow and get everything figured out.’ We will talk tomorrow. There was no tomorrow,” Josh said. “It was the last time I heard his voice.”

He encourages everyone to make memories that will be impactful and last. He believes time is one the most important gifts, as we don’t know what tomorrow holds.

“I have some big shoes to fill; there is no doubt about that,” Josh said. “My father has laid a solid foundation of how to be a husband, how to be a family man, and how to be a friend.”