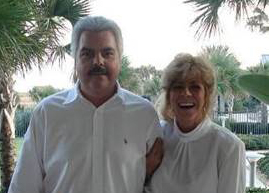 You never said I'm leaving. You never said goodbye. You were gone before we knew it & only God knows why. It broke our hearts to lose you but you didn't go alone, for part of all of us went with you, the day that God took you home.

The expression, “a parent should never have to bury his or her child,” became a tragic reality for Nora, who lost her son Anthony “Tony” L. Ciamitti on October 3, 2014, who met an untimely and preventable death due to a bee sting at the age of 48.

Tony was born on June 20, 1966, clear of any allergies. But four years ago, the doctors informed Tony and his family that he was allergic to bee and wasp stings; however, the severity of his insect sting reactions was unknown, as they vary from person to person. From that time, Tony was stung four times, but on his fifth sting, Tony experienced a life-threatening allergic reaction.

“Our entire family had absolutely no insight or knowledge on just how deadly any type of allergy could be,” Nora said. “We want to bring awareness to the precautions one can take to prevent deaths such as my son’s.”According to WebMD, approximately 50 deaths in the U.S. are attributed to allergic reactions to insect stings each year.

Tony was the only son of the Ciamitti family, having three sisters, Tammie, Sandy and Krissy, who loved him very much. Tony had a contagious laugh and his personality was over the top. His heart was huge and was loved by everyone he met. In 2008, he moved in with his mother after his father passed away to care for his mother. “He truly stepped up to the plate and showed me how loving and special he genuinely was,” Nora said.

His family was very dear to him, and much of his time was spent with his niece Angela and nephew Andrew. He was never too busy to take Angela fishing, and they had an “ice-cream date” once a week. He was also very proud of his nephew and spent every minute he could with him.

When faced with the decision to donate Tony’s organs and tissue, Nora felt it was a great dilemma. “I imagined just how happy some person, child and family would be to receive a gift of life,” said Nora, “but on the other hand, my child is gone, and I want him back.”

Nora felt that she made the right decision to donate her son’s organs and tissues to those in need, while creating more awareness about life-threatening allergies. “I pray that the gifts Tony gave will live on in others for generations to come,” Nora said.