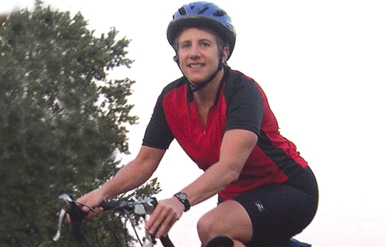 Rita Zeidner, a journalist from Arlington, Va., was limping along and recovering slowly from reconstructive knee surgery. She had torn her anterior cruciate ligament (ACL) after falling on an icy ski trail in Colorado.

During Rita’s first visit to the orthopedist, she was devastated to hear that a damaged ACL doesn’t heal. But, she says, her spirits improved when she learned that many injured athletes had returned to their sport after having new tissue transplanted in their damaged knees.

Rita’s doctor offered her two recovery options. He said he could take healthy tissue from her leg, reshape it into a new ligament and stitch it into her bad knee. Or he could perform a similar procedure using allograft tissue recovered from a deceased person. For the same result, the allograft option would be less painful and result in a shorter recovery.

“Given the alternatives, I made what seemed the more rational decision to receive an ACL from a tissue donor,” says Rita.

Today, Rita says she is back to her old self and owes a large part of her recovery to Bob Jones, a man she never had the privilege of knowing but learned about while researching an article on knee injuries for the Washington Post.

Bob’s life had come to an end in the early hours of January 1, 2002 (Bob’s story is located on the donor stories page). He and his wife, Kathy, had spent New Year’s Eve with their daughter and were driving back to their home in Dixon, Ill., when a drunk driver rear-ended their car at full speed.

“Lucky for me, Kathy was well aware of Bob’s thoughts on the tissue issue,” says Rita. “Only six months before his death, she had needed an allograft after tearing her ACL in an on-the-job accident. She knew that her husband would have been pleased to see the favor returned.”   Rita says that ligaments taken from Bob’s leg were just what the doctor ordered.

“It was a painful and slow process,” says Rita. “However, I can only imagine how much more difficult my recovery would have been if my doctor had to perform the reconstruction using my own tissue. But 18 months after my accident and a year after I’d begun to fear I’d never be able to return to my old activities, me and my knee are doing great.”