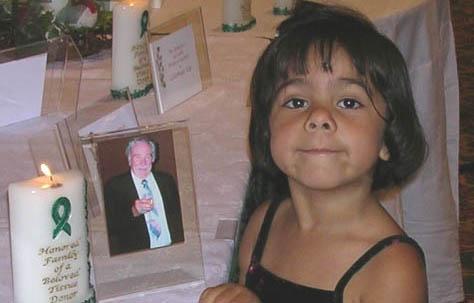 Quentin Durell, from Arizona, lived to be 83 years old and experienced the better part of the 20th century during his life. He suffered a heart attack and passed away in 2001. When Quentin passed away, his Hospice nurse asked Quentin’s children if they had considered organ and tissue donation.

The family had never discussed donation before, but decided that it was “the right thing to do,” says Quentin’s daughter, MaryAnn Durell.

“It makes you feel good because you’re able to help others,” says MaryAnn. “You never know when you might need it yourself.”

In fact, the only thing the family was concerned about was that Quentin look alright for his funeral – which he did. As Catholics, the funeral was important to the family, especially Quentin’s wife, Bertha. MaryAnn says her mom couldn’t even tell that anything had been donated.

MaryAnn, who works as a nurse in Arizona, says she has visited patients in the burn unit at her hospital and seen just how important tissue donation can be.

“This unit is serious,” she says. “Some of these patients have burns on 99 percent of their bodies. They really need donated tissue.”

MaryAnn says that she and her family are glad they chose donation and to help those in need. She says that she would also be willing to share her own tissue with others.