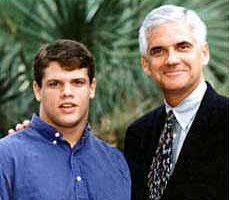 Steve Oelrich, Florida State Senator and former Sheriff of Alachua County, Fla., clearly remembers Father’s Day 1995. That was the day his 18-year-old son Nick was left brain-dead by a head injury suffered during a fall at a post-high school graduation celebration. “This was absolutely the darkest moment of my life,” says Steve.

Like most people, Steve and his family had not sat down in advance to discuss organ and tissue donation. But Steve says it seemed appropriate to give Nick’s organs and tissue to other people in need because Nick had been very generous in his life. The high school football player frequently shared his possessions such as baseball gloves and books with his friends.

The family’s decision to donate allowed more than 100 people to receive bone, tissue and organs from Nick, including his heart, lungs, liver and pancreas.

Now, Steve is on a crusade to encourage people to take time to plan for the inevitable and document in advance if they want their organs and tissue given so others may live. He is leading a nationwide campaign to increase awareness of the need for organ and tissue donations.

“If we can convince even a handful of people to become donors, we could save the lives of dozens of people who have no other option available to them,” he said.

It is a good cause, and Steve works hard at it. He still misses his son deeply.

“I’d give almost anything to have Nick come in the back door, open the refrigerator and eat me out of house and home.”