In the second quarter 2017, as described in greater detail below, each of RTI’s businesses generated top-line growth, including its commercial business, which continues to show signs of stabilization. RTI also delivered double-digit revenue growth across its direct business, including its spine, surgical specialties and cardiothoracic segments, as well as continued revenue growth in its sports medicine and orthopedics segment and its International business.

“We are making tangible progress toward our plan to transform RTI and return it to a path of solid, predictable and sustainable growth,” said Camille Farhat, chief executive officer, RTI. “While we are still in the early phase of this effort and there is more work to do, we are beginning to accomplish what we set out to achieve. Our Commercial business continues to stabilize, our direct business delivered another quarter of strong performance and our Spine business continues to grow at above-market rates. We are encouraged by our strong second quarter results and remain laser-focused on implementing our strategic initiatives and generating value for our employees, customers and shareholders.”

As previously announced, RTI’s management has been implementing a series of initiatives to reduce complexity, drive operational excellence, and accelerate growth to position the company for long-term and sustainable profitability. As part of these initiatives, RTI has appointed Paul Montague as Head of Human Resources and Enrico Sangiorgio to lead the company’s international operations. Mr. Montague brings more than 15 years of global experience in senior human resources roles to RTI and Mr. Sangiorgio’s nearly two decades of leadership positions with European healthcare organizations will be instrumental in growing RTI’s International platform. The company is also actively recruiting for its top two R&D positions.

As part of its focus to reduce complexity, RTI recently completed the previously announced sale of substantially all the assets of its cardiothoracic closure business to an affiliate of A&E Medical Corporation for total consideration of up to $60 million in cash. Concurrent with the sale of the business, RTI entered into a multi-year Contract Manufacturing agreement whereby RTI will continue to support the cardiothoracic business under A&E Medical’s ownership through the manufacturing of existing products and the engineering, development and manufacturing of potential new products in the future.

RTI used the majority of the proceeds from the sale, net of transaction fees and anticipated taxes, to reduce its term loan, as it extended the maturity of its existing credit facilities. The transaction was made possible by RTI’s success growing its cardiothoracic closure business by a compounded annual growth rate of more than 25% over the last five years, through a focused R&D and disciplined direct channel strategy, and demonstrates RTI’s proven ability to create value in OEM product lines. The sale of the cardiothoracic closure business represents an important action toward RTI’s stated goals to reduce complexity in its business and devote resources to those businesses, products and markets with the greatest growth potential.

“Longer-term, our focus will continue to be to: 1) simplify our business to manage costs, specifically in tissue acquisition and processing, 2) deepen our investments in our people with a focus on R&D to accelerate growth and innovation, and 3) ensure a culture of disciplined execution to achieve sustainable profitability,” said Mr. Farhat. “The sale of our cardiothoracic closure business during the quarter was an important first step toward our effort of enhancing RTI’s platform for operational excellence. We are committed to further streamlining our business and evaluating strategic growth opportunities so that we can devote resources to the areas that align best with our long-term growth aspiration. With our talented team, dedication to our customers and innovative products, I am optimistic that RTI is on the right path to success.”

The company has developed its guidance based on its ongoing restructuring and operational improvement program, its current business profile and existing market conditions.

Within this context, based on second quarter results and the transition of the cardiothoracic closure business from a direct business to a commercial business as a result of the sale, RTI expects full year revenues for 2017 to be between $274 million and $280 million compared to prior guidance of between $274 million and $285 million, with direct revenues anticipated to grow low-to-mid single digits on a percentage basis compared to 2016, while commercial/other revenues are expected to be relatively flat on a percentage basis.

As detailed in the reconciliation provided later in this release, excluding the severance-related expenses in the first half of 2017, the expected third quarter 2017 gain on the sale of the cardiothoracic closure business, and including the transition of the cardiothoracic closure business from a direct business to a commercial business as a result of the sale, RTI expects adjusted full year net income per fully diluted common share to be between $0.04 and $0.08 compared to prior guidance of between $0.05 and $0.10, based on 60 million fully diluted shares outstanding.

RTI will continue to evaluate its operating platform throughout the year and will update its top and bottom line guidance as its actions might warrant. 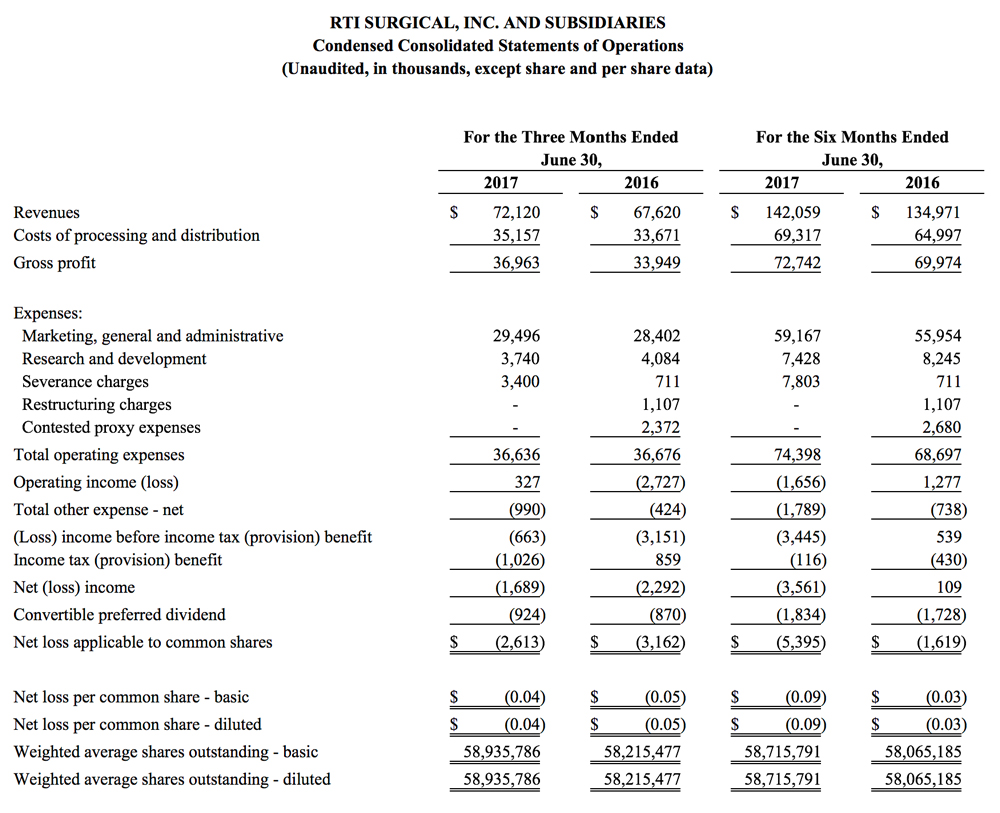 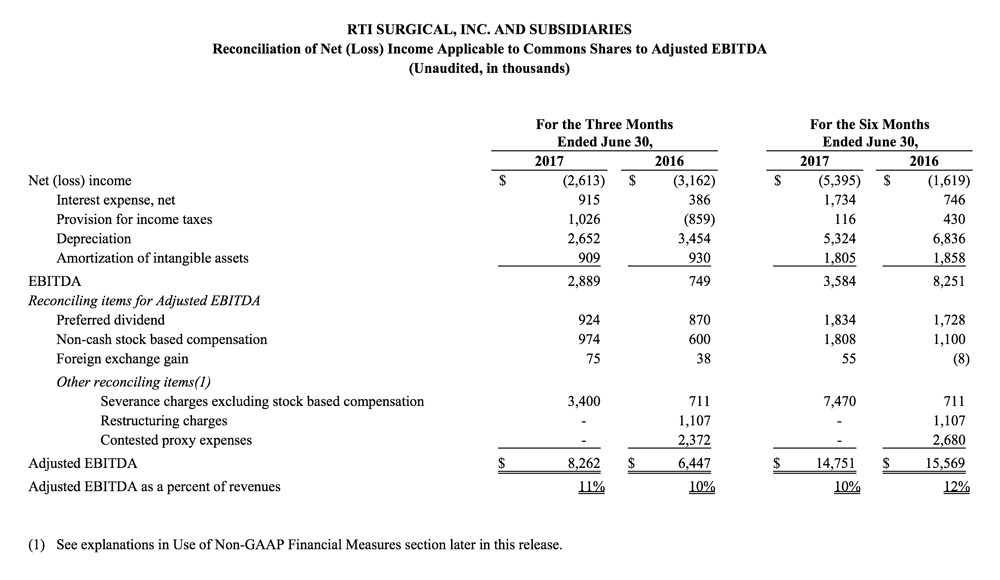 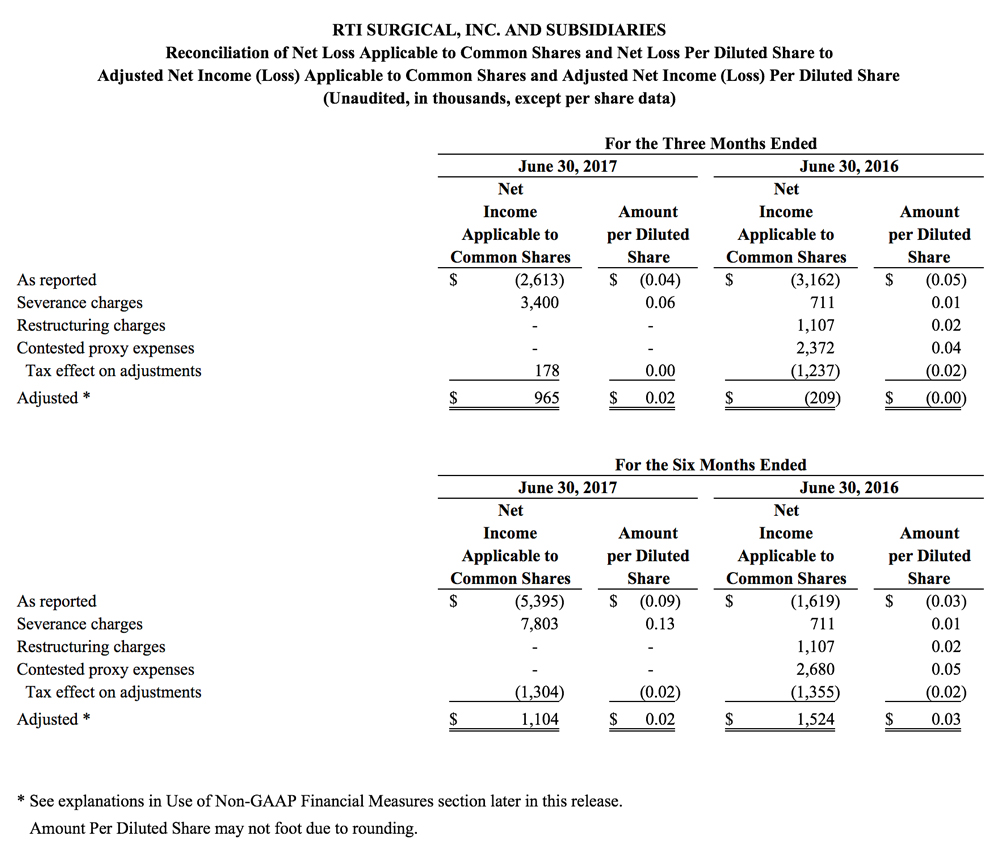 The following is an explanation of the adjustments that management excluded as part of adjusted measures for the three and six month period ended June 30, 2017 and 2016 as well as the reason for excluding the individual items:

(1) Severance charges – This adjustment represents charges relating to the termination of former employees. Management removes the amount of these costs from our operating results to supplement a comparison to our past operating performance.

(2) Restructuring charges – This adjustment represents the closure of our French distribution and tissue procurement office. Management removes the amount of these costs from our operating results to supplement a comparison to our past operating performance.

The Company believes that presenting Adjusted EBITDA, Adjusted Net Income Applicable to Common Shares and Adjusted Net Income per Common Share - Diluted in addition to the related GAAP measures provide investors greater transparency to the information used by management in its financial decision-making. The Company further believes that providing this information better enables the Company’s investors to understand the Company’s overall core performance and to evaluate the methodology used by management to assess and measure such performance. 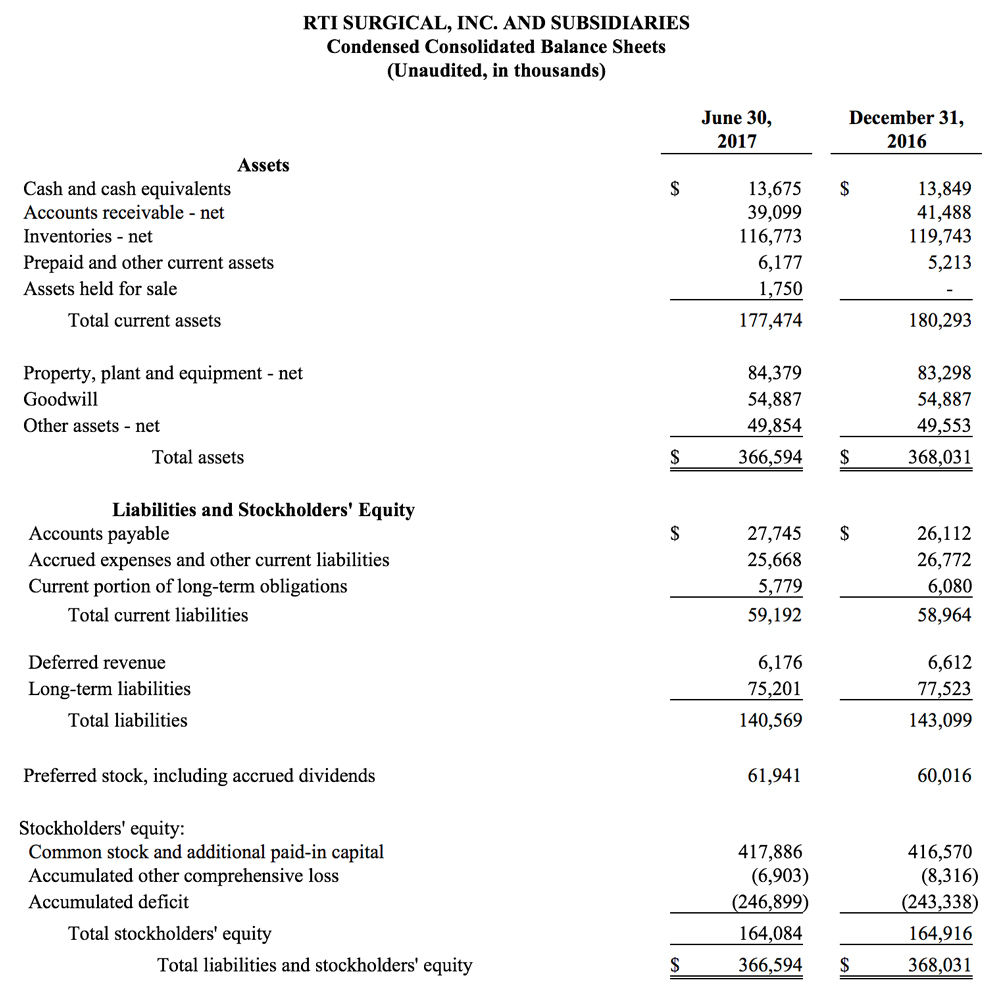 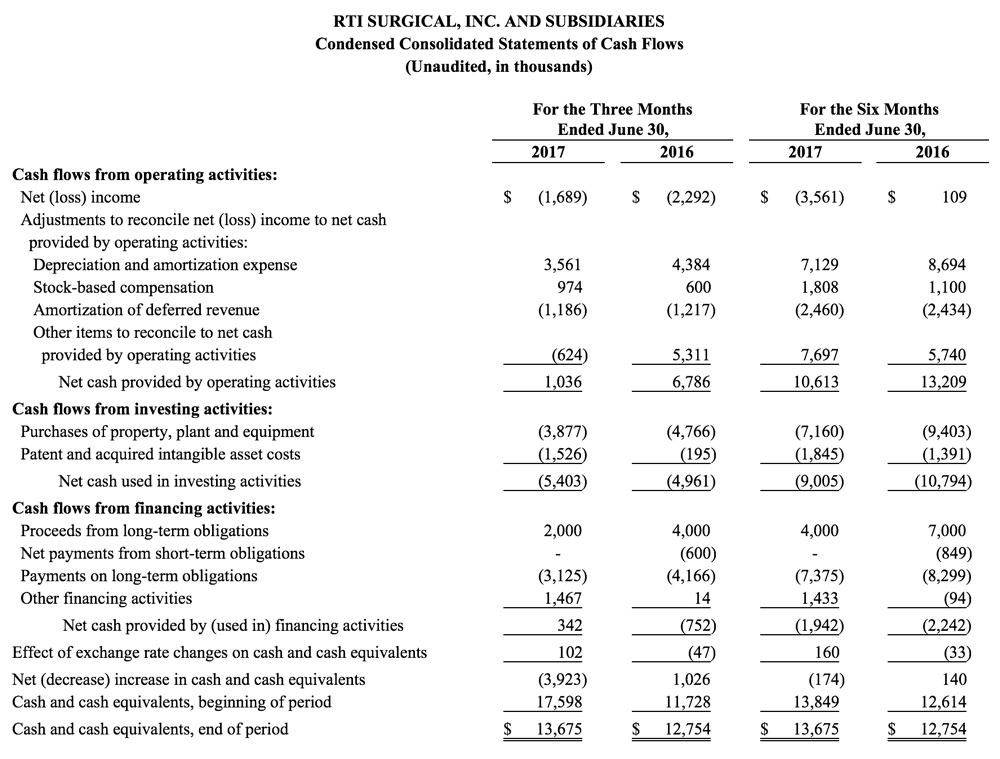