“We are pleased that revenues of $76.1 million in the fourth quarter exceeded our guidance of $68 million to $69 million,” said Brian K. Hutchison, president and chief executive officer. “In the fourth quarter, we benefitted from stronger than expected orders from certain commercial distributors. As we have mentioned in prior quarters, the commercial business is less predictable on a quarterly basis due to the timing of distributor orders. For the full year 2015, our U.S. direct business grew 9.6 percent. We look forward to finalizing our results for the year and sharing with you our plans for continued growth in 2016.”

The company expects to release its full fiscal fourth quarter and full year 2015 results on Feb. 16, 2016.

This communication contains forward-looking statements within the meaning of the Private Securities Litigation Reform Act of 1995, including those regarding our anticipated preliminary unaudited fourth quarter and full year 2015 revenue, the release of our full fourth quarter and full year 2015 results and our plans for continued growth in 2016. These forward-looking statements are based on management’s current expectations, estimates and projections about our industry, our management's beliefs and certain assumptions made by our management. Words such as "anticipates," "expects," "intends," "plans," "believes," "seeks," "estimates," variations of such words and similar expressions are intended to identify such forward-looking statements. In addition, except for historical information, any statements made in this communication about anticipated financial results, growth rates, new product introductions, future operational improvements and results or regulatory actions or approvals or changes to agreements with distributors also are forward-looking statements. These statements are not guarantees of future performance and are subject to risks and uncertainties, including the risks described in public filings with the U.S. Securities and Exchange Commission (SEC). Our actual results may differ materially from the anticipated results reflected in these forward-looking statements. Copies of the company's SEC filings may be obtained by contacting the company or the SEC or by visiting RTI's website at www.rtix.com or the SEC's website at www.sec.gov. 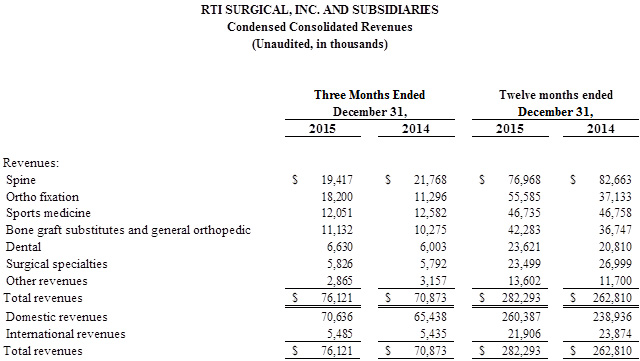